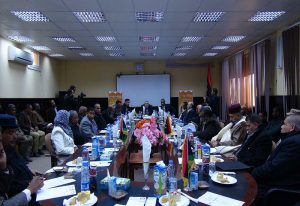 NOC chairman Sanalla during his visit to Jalo said that Libya’s oil production had reached a three-year high of 708,000 bpd  (Photo: NOC).

Libya’s oil production is up to 708,000 bpd, a three year high, the National Oil Corporation’s (NOC) chairman Mustafa Sanalla revealed. Sanalla made the revelation yesterday during his visit to the Jalo oil production area in south east Libya where he met with local dignitaries and civil society organizations.

During the visit, Sanalla discussed local development and environment issues in the region and said that the region suffered from huge neglect and needed the state to support it. To underscore this need, Sanalla visited the local A&E hospital built by the NOC and ENI which, although handed over to the Ministry of Health in 2013, was yet to be opened.

Sanalla also laid the foundation stone to a local Petroleum Institute which he hoped would aid development and training in the region.

Meanwhile, Sanalla continued his media attack on fuel smuggling and its effects on Libyans. In an earlier statement released by the NOC, Sanalla expressed his condolences for the death of a Libyan family by carbon monoxide poisoning as a result of using charcoal for heating due to power cuts and fuel shortages.

‘‘I was pained very much by what I heard about the story being reported about the death of a whole Libyan family by suffocation as a result of power cuts’’.

‘‘This family represents the thousands of miserable cases that poor Libyan citizens suffer’’ as a result of fuel smuggling or demonstrations preventing oil production.

In the same vain, Brega Marketing, the NOC’s fuel distribution company, announced that it was increasing deisel distribution by 2.5 million litres in view of the cold weather and power cuts so as to meet increased demand for heating. Cooking gas cylinder distribution will also be increased.

The company said that it will also be initiating ‘’strong’’ anti-smuggling measures to prevent fuels going into the black market.

Brega also announced that it was rolling out the installation of a number of Point of Sale (POS) machines at petrol stations so that customers can pay with their debit cards. This move is aimed at mitigating the current cash crises at Libyan banks. Cooking gas cylinder distributors will also have POS systems in the next phase, Brega revealed.