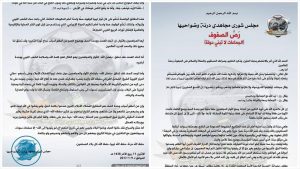 In a statement released Monday, the DMSC called on the thuwar (rebels during the 17 Feb Revolution) to unite together in the face of ‘‘suspect operations supported from abroad’’ which Derna deterred through the will of god.

It invited all those of like creed to its city calling on them not to feel the sadness of a heartache of leaving their city – a reference believed to be to the recent escape from Benghazi by the Benghazi Defence Brigades (BDB).

The DMSC announced its support for the victories in Misrata, Sabratha and Benghazi and called for unity against the ‘‘criminal ISIS’’ used by local, regional and international ‘‘evil powers’’ to bring down the Arab Spring revolutions.

It called for unity with the Grand Mufti stating that they ‘‘are his soldiers’’ fully supporting him in his rejection of any foreign protectorate-ship on Libya.

Furthermore, it accused Serraj and Hafter of being treacherous to the Libyan people and of selling the country, adding that they are destined to the ‘‘rubbish heap of history’’ together with anyone who supported them ‘‘even with a word’’.