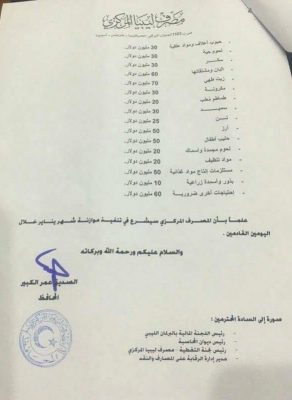 The Tripoli-based Central Bank of Libya (CBL) is to release US$ 750 million in the form of Letters of Credit (LCs) to cover imports for the month of January – pending the approval of the 2017 ‘‘budget’’.

A leaked document dated 9 January and signed by Governor Saddek ElKaber reveals a list of 19 product categories with the LC amounts set aside to cover their import. The CBL said that this was a ‘‘temporary’’ and ‘‘suggested’’ list jointly approved with the Audit Bureau pending the approval of the ‘‘temporary budget’’ which will take no less than 60 days to process. 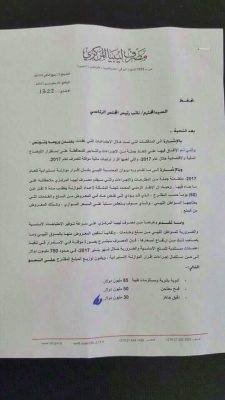 The Tripoli-CBL has approved US$ 750 million of LCs for January pending budget approval (CBL).

The early release of hard currency for imports during January prior to the approval of the ‘‘budget’’ was in order to ‘‘avoid shortages in the market’’ that could lead to a rise in prices in both the official and black market, the CBL explained.

The proposed list of imported products is, on the one hand, very revealing for those interested in supplying the Libyan market, but equally it further underscores how import-dependent Libya is for its basic foodstuffs such as cooking oils, rice, pasta, tomato paste, dairy products and grains.

It will be noted that the CBL refers to the temporary ‘‘budget’’ as the ‘‘temporary financial arrangement’’ as it is politically and legally contested. The Libyan legislature, the Tobruk-based House of Representatives, has not approved the 2017 budget and the Faiez Serraj-led Presidency Council/Government of National Accord has used a clause in the 2015 Libyan Political Agreement to bypass HoR budget approval. The HoR insists that the PC/GNA has misused the relevant clause in the LPA.

Irrespective of the merits of the legal interpretation of the contested clause, the PC/GNA, together with the international community, have been able to persuade the CBL and Audit Bureau of the validity of this clause. In turn, because the revenues of Libya’s hydrocarbon exports are channelled through the Tripoli-based CBL, the CBL’s approval is pivotal to the PC/GNA obtaining a 2017 budget.