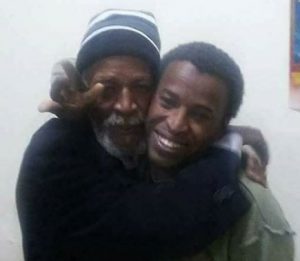 A senior commander in the 210 Brigade is reported to have been killed today in a landmine explosion as troops continued their slow push into the main Benghazi terrorist enclave of Ganfouda.  The death of this unnamed officer is only the latest death of senior commanders in the Benghazi fighting.

The days was also marked by the escape from the terrorists of a number of prisoners, including a captured Libyan National Army solider Hamid Shaaban. In circumstances that remain unclear, he got away from his captors along with four others, who have not been identified. 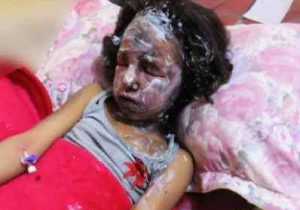 Photo of  a burnt girl who reportedly escaped Ganfouda today with her family (Photo: Social media)

A number of civilians has also made it to LNA lines including a family whose badly-burned infant daughter was reported to have been injured in an air strike.

An aircraft bringing back boycotting Presidency Council member Ali Gatrani and members of the House of Representatives from talks in Malta landed at Benghazi’s Benina airport.  A member of the airport management is reported to have said that he believed it would not be long before Benina finally reopened for normal civilian traffic.