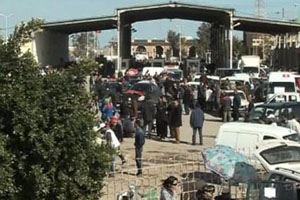 Traffic at the Raj Jedir crossing on the Tunisian-Libyan border is finally moving again after several days being closed other than to ambulances and emergency cases.

Protestors in the Tunisian border town of Ben Guerdane had continued to prevent the movement of traffic to and from Libya despite a fresh deal last Tuesday by the two countries to re-open the crossing.

Local sources have confirmed that the protests have now ended, although the head of the Ras Jedir crossing on the Libyan side was quoted by the Libyan news agency LANA as late as on Sunday afternoon saying that it remained closed except to emergency services.

Tuesday’s deal followed a dispute over the movement and taxation of goods and saw vehicles stacked with goods parked up at the border crossing for a number of days.

The demonstrations and road blockages in Ben Guerdane, an economically-deprived community that relies not only on legitimate trade with Libya but also smuggling, had stopped all vehicles passing any further. Local traders and residents had been demanding a freer flow of goods to and from Libya as well as increased government investment in the areas.

An announcement today by the Tunisian authorities that Libya has now agreed to drop customs taxes on all imports from Tunisia is seen has having changed minds in Ben Guerdane. However, it remains to be seen if this will be enacted on the Libyan side.