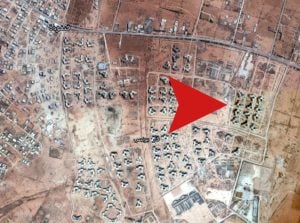 A Libyan National Army commander has announced victory in the Benghazi’s Ganfouda district though it appears that some terrorists are still holding out in small group of high-rise apartments.

The victory proclamation from a senior officer in the Zawia Martyrs’ Brigade has not yet been confirmed by LNA sources.

In the last 24 hours there appears to have been a steady collapse of resistance by t militants, abandoning a succession of building. From within them 63 prisoners freed. In addition, some 60 families have fled across LNA lines in scenes reminiscent of the flight of women and children in the last days of the Bunyan Marsous operation against terrorists in Sirte.

The majority of the freed prisoners appears to have been former Qaddafi soldiers originally held in the Budhima military prison who were evacuated by the terorrists before they lost the area.  Among them is Colonel Mohammed Ati who was released today reportedly not yet knowing that two of his sons had been killed last year fighting with the LNA in Leithi.

Six LNA soldiers died in battle yesterday. Casualties today are not yet clear.