Sanalla looks to entice BP back to Libya 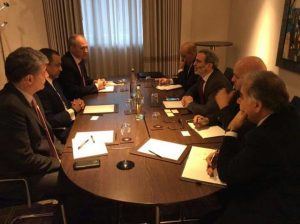 National Oil Corporation (NOC) chairman Mustafa Sanalla has met with British oil company BP in London to discuss the possible resumption of its activities in Libya, the NOC has said.

BP used to invest heavily in Libya but suspended its operations in 2014 due to the unstable security situation and was reported to have taken a $600-million hit.

Sanalla told the head of BP’s head of north African operations, Hesham Mekawi, and Vice-President of Exploration in Africa, Jasper Pejis, that the country’s oil crescent region was now safe and ripe for exploration. It represents an important development as the NOC attempts to expand investment and boost production after the latter’s dramtic decline over the last couple of years because of the political crisis.

The announcement comes as Sanalla told potential investors at a London conference Libyan that new oil exploration projects would now be open to foreign investment following a five-year moratorium. “We can use oil to unify the country,” he said, despite conceding that the country lacked a united and fully-backed government.

While in London, Sanalla also met with foreign partners currently involved in Libya – German oil company DEA, Austria’s OMV, US oil giants Amerada Hess and ConocoPhillips (‎two of the three American partners in Waha Oil), Spain’s Repsol and the Polish Oil and Gas Company. At the centre of all the discussions was the possibility of the companies expanding their involvement in Libya.

Also in London, he had discussions with Egypt’s Minister of Petroleum and Mineral Recourses, Tarek El Molla.