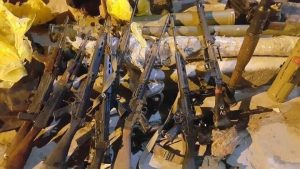 Stocks of weapons were reported found in Ganfouda by the LNA (Photo: LNA)

White flags have been raised today in the remaining rebel-held buildings in the Busnaib area of Benghazi’s Ganfouda district following an attempted breakout by Islamist militants.

According to a Saiqa (Special forces) official, a convey of cars attempted to flee as the Libyan National Army (LNA) attacked what is known as “12 Buildings” in Busnaib at 6am this morning. Saiqa apparently killed three of the militants in the ensuing firefight which led to the remaining combatants retreating back to the area. Some, though, may have escaped.

During the fight, the LNA reportedly managed to seize eight buildings in the district and, according to an LNA official, to free some more people held captive by the militants. He confirmed that white flags had been seen in the remaining buildings, although it was unknown whether the militants or members of their families or any residual prisoners they might continue to hold were responsible.

However, clashes were still taking place, the official told the Libya Herald.

It had been claimed by the LNA that Busnaib was liberated ten days ago. Ganfouda was declared completely free two days ago when it was also announced that over the previous 48 hours the LNA had released some 60 women and children from the militants.

Last night, Field Marshal Khalifa Hafter congratulated his forces in an interview Hadath TV and praised those local residents who had joined the fight. He also paid tribute to those who had died in the battle for the city, adding that he would not rest until all those injured in the struggle were fully treated. There was a stark warning too for any remaining rebels: “Die or give up.”

The liberation of Ganfouda and the freeing of captives held by the militants has also been welcomed by UN special envoy Martin Kobler.