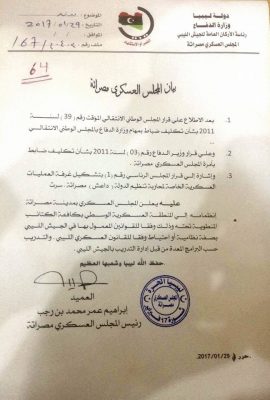 Misrata Military Council announces that all its militias will join the ”Libyan Army” (Photo: social media).

Misrata military council (MMC) has announced that all militias operating under its control will now join the Central Military Zone of “the Libyan Army”.

This refers to the forces in much the west of Libya that currently support the Presidency Council, rather than the Libyan National Army (LNA) led by Khalifa Hafter.

Sources close to Misrata have described the announcement as a move to recreate a united military institution.  However, they also make clear that their Libyan army will have nothing to do with the LNA.  It they describe as “private protection units and militias” and Hafter as a “rogue general”.

Many, although not all, of the units under the control of the MMC formed the major part of the Bunyan Marsous Operations Room (BM) which finally ousted the so-called Islamic State (IS) from Sirte last month.  In its bloody eight-month battle against IS in which over 700 of it fighters died, it was forged by fire into a relatively structured fighting force similar to the LNA.

There are, however, other forces that were not part of BM but which are answerable to the military council which would logically also be part of the any formal future Libyan army structure, the most obvious being the Third Force, currently deployed in southern Libya.

In a similar statement last week, Presidency Council deputy chairman Ahmed Maetig also indicated that Libya’s various militias could be absorbed into a single army, saying that they had a critical role to play. He made specific mention of Bunyan Marsous although, like the Misrata statement, he also was scathing about Hafter and dismissed the LNA as no more than a small group of militias.