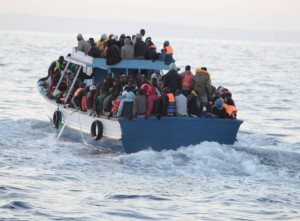 A Libyan coastguard vessel was reportedly shot at from the shore by people-smugglers as it intercepted 700 migrants off Sabratha.

Naval spokesman colonel Ayoub Qassem told AFP that, as the coastguard vessel closed with the two wooden vessels onto which the migrants had been crammed, it came under fire from people-smugglers on the beach.

The coastguard reportedly returned fire and the smugglers fled. There were apparently no casualties among either the coastguards or the migrants, who were described as mostly being sub-Saharan Africans.

It seems possible that the people-smugglers may have actually launched the attack from one of their own vessels since Qassem was also quoted as saying that the incident had taken place three nautical miles from the coast.

The relationship between the coastguard and the smugglers has at times appeared ambiguous. Last October a vessel with coastguard markings was filmed from a rescue ship attacking a raft with migrants and apparently trying to seize its outboard motor.  Panicking migrants capsized their craft and as many as 20 may have drowned.  The navy denied that one of their vessels had been involved.

Equally the people smugglers have been prepared to work with the authorities.  Last May one gang called the coastguard to warn them that a migrant vessel was sinking.