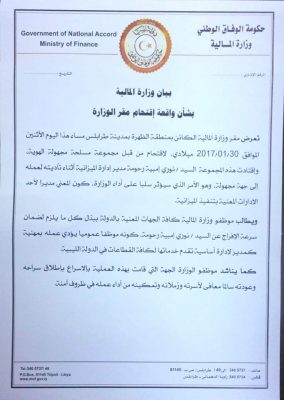 The GNA’s Ministry of Finance announced that an armed group stormed its Tripoli HQ and kidnapped a department head (Source: MoF).

A government official was kidnapped when an unknown armed group stormed the finance ministry (GNA) in Tripoli’s Dahra district yesterday afternoon. The gunmen, believed to be part of a militia, attacked during working hours and dragged the head of the budget administration, Nuri Erhuma, out by force.

Colleagues have expressed their concern about his safety.

“We demand all governmental departments exert maximum efforts to free our colleague, ” they said. Erhuma was merely a public servant doing his job professionally, they stressed.

The ministry has said it holds the kidnappers responsible for his safety and wellbeing.

No information has been revealed about the identity or number of the abductors. Their motive, whether financial or political, is likewise unknown at present.