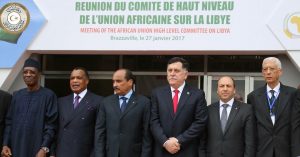 The African Union has called on Libyan political factions to work on amendments to the Libyan Political Agreement so a unified army operating under a consensus government could be created.

In its final statement  on the second and final day of a mini-summit in Brazzaville, Congo the AU repeated its insistence that there could  be no military solution to the crisis. It also demanded an end to foreign interference in Libya which it said continued to “feed the conflict and undermine the political process.

However the meeting did applaud the liberation of Sirte from IS terrorists and said it would continue to support such efforts.

Presidency Council chairman Faiez Serraj was at the mini-summit along with UNSMIL head Martin Kobler and representatives of the Arab League. The meetings were hosted by Congo’s President Denis Sassou Nguesso

Serraj said counter-terrorist operations needed “the building of a unified military organisation” and insisted he continued make strides to consolidate such an institution, without specifying what steps were actually being taken.

Serraj also asked the international community help train and rehabilitate his security forces and repeated his demand the arms embargo on Libya must be lifted.

He insisted his PC would continue its efforts to include all those party to the LPA and would listen to any Libyan committed to  peaceful transition. Serraj added that it was critical the country “turn the page on the past” and move forward in setting up a legitimate justice system.