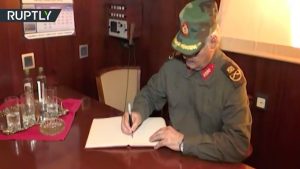 Dozens of injured soldiers from the Libyan National Army are reportedly being treated in Russia. The arrangement is likely to have been agreed during the visit last month by armed forces commander-in-chief Khalifa Hafter to the Russian carrier Admiral Kuzentsov.

A source at Benghazi’s Benina airport told Reuters that 70 wounded troops had been flown to Egypt from where they had been taken on to Russia for treatment. More injured were to follow.  In the long drawn-out battle for Ganfouda, the LNA has taken many hundreds of dead and wounded – no accurate figure has been released.

In the past injured soldiers who could not be treated in Benghazi or Tobruk have been flown to Egypt or Tunisia. In Tunis, at two different hotels not very far apart, predominantly young fighters from both the LNA and Bunyan Marsous kill the time while waiting for post-operative treatment in Tunisian clinics, BM fighters have also gone to other overseas hospitals in countries, including Italy and Turkey.

The Libya Herald has been told that the man in charge of the operation to take injured LNA soldiers to Russia is the Libyan ambassador to Saudi Arabia , Abdel Basset Al-Badri who is a close friend of Hafter.