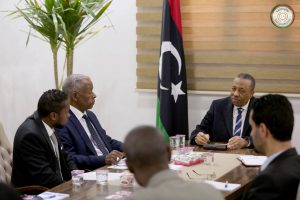 The continuing plight of the people of Tawergha was discussed by a delegation from the destroyed town this evening and the interim government prime minister Abdullah Al-Thinni in Beida. The Tawerghan delegation included the head of the now Tripoli-based Tawergha council and the town’s member of the House of Representatives, Jaballah Al-Shibani.

The living conditions facing the estimated 40,000 Tawerghans living in exile across Libya were the main subject of the talks, according the Thinni government.

This is not the first time that Thinni and the Tawerghans have met to discuss the situation. In an interview exactly a year ago, Shibani complained that although requests had been put to Thinni for funding for the urgent construction of prefabricated houses on state-owned land provided by some municipalities, nothing had been done by the Beida government “despite our repeated visits”.

From the statement published by the Beida government this evening, there is no sign that anything has changed.