More dinars are flown in to Tripoli to ease currency shortage 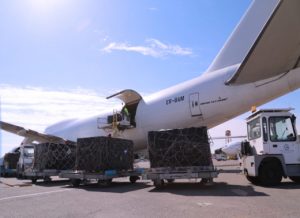 Bank notes being unloaded at Mitiga from a Moldovan cargo plane (Photo: CBL)

A fresh shipment of banknotes has been flown into Tripoli’s Mitiga airport from the UK on a Moldovan cargo plane.

The Libyan Central Bank said today that the new notes had  arrived on Wednesday. It did not say how much was in the latest consignment but promised that the notes would be distributed throughout the country.

Libyan dinars are normally produced by the British security printing company De La Rue. However last May the rival Central Bank in the east distributed LD 4 billion of new notes that it had commissioned from Russia, which were printed at the state-owned Goznak works in Moscow. After initially condemning the new notes, the Presidency Council later agreed to accept them.

Last April and again in June, the CBL in Tripoli took delivery of several hundred million dinars’ worth of new notes. The exact figure was never revealed. The bank said today that this latest shipment could be followed by further consignments over the next few  months.

It remains unclear if the new notes will finally ease the liquidity shortage in the banking system. The inability to get much, or indeed any money out of bank accounts has caused the substantial hoarding of cash.  Tensions have often boiled over as customers wait to withdraw money. Yesterday morning, two people were reportedly shot and killed by security guards in a stampede outside an overcrowded bank.

Equally uncertain is the inflationary impact of the issuance of new notes. On the blackmarket today the US dollar was trading at LD 6.10.