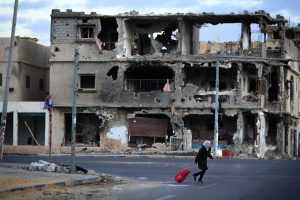 The continuing danger to returning residents of unexploded ordinance in Sirte was shown again today when a father and two of his children were injured by a landmine outside their house.

The property had reportedly once been used as an IS operations room. The mine that exploded was by the front door.  Fortunately for the family, who had just come back to their home, the injuries were no more serious than burns and an injured hand.

Sirte is peppered with landmines left by IS terrorists. Mayor Mukhtar Al-Madani last week appealed for greater international and local help in dealing with unexploded ordinance.

Only two days ago three children were hurt by an explosion in Sirte when small arms ammunition was thrown onto a fire.

The news came as Al-Madani held talks with military officials and the operations team in charge of getting Sirte residents home. Some 700 are due back tomorrow morning, as part of a six-stage programme to return the townsfolk, some of whom no longer have any homes to come back to.