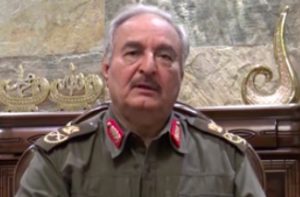 The head of the armed forces appointed by the House of Representatives stated both in an interview with French TV station JDD. The LNA, he declared, controlled all of the east and the south and a large part of the west of Libya.

Derna, the remaining militants’ holdouts in Benghazi, Sebha and the many towns along the western coast from Misrata to Sabratha and beyond were evidently forgotten.

As to those towns, he said there no wish to strike at any Libyan town, be it Misrata or any other.

“We do not wish to deviate from our main end,” he said, “which is to fight Al-Qaeda, the Islamic State and the old Libyan Islamic Fighting Group who are still under the control of Abdulhakim Belhaj. We are going to pursue these groups that want to prejudice the future of the Libyan people. Once they have got out of the country, we will leave them in peace”.

Hafter said that the fighting against terrorists in Benghazi was almost over. Unable to sustain themselves, little remained of the groups. They were surrounded. They had no other choices but to surrender or die.

Speaking of the oil crescent area, Hafter said it was entirely protected by the LNA . However, he added that militias which were supported by bodies “with specific agendas,” had tried to launch attacks. “They bumped into our military forces who made them backtrack.”

Nevertheless, he insisted, the army was constantly on the alert. “If they try to come back, we will push them back again with more firmness.”

The interviewer quizzed Hafter about his relations with Russia and his visits to Moscow. He responded that Libya had historic links with Russia.

“And these relations naturally comprise contracts and some agreements which bind us. We are waiting the activation of these agreements and contracts so the army can benefit from them. We hope also that Russia will join in the lifting of the unjust [arms] embargo which is imposed on us”.

He added: “We are hopeful also that the United States will join in the lifting of the embargo and in the struggle against terrorism, if one is to believe what Mr Trump has said.”

But since he was speaking to a French audience, Hafter majored on his links with Paris and French help against terrorists in Benghazi. Libya, he said, owed France a debt of gratitude that it would never forget.  Libyans always said that one found out who one’s friends were when you really needed them.

“She has really helped us in a way that no other country has,” said Hafter. “She has provided us with information from military reconnaissance and her security experts, who have helped us very much.” This had been of enormous benefit.

He added that he had been profoundly saddened at the loss of three French security personnel in a Benghazi helicopter crash last July.

“But the the French government has not abandoned us,” he said. “They rapidly came up with other alternatives. It stands to reason that we will not forget this wonderful work.”

He added that France had not become involved in sending any troops because the LNA had no need of reinforcements on the ground.

Hafter said that in the near future Libya would start to rebuild and there would be opportunities for France and other advanced countries in the provision of know-how and industrial expertise.

Libya, he predicted, would be open for business