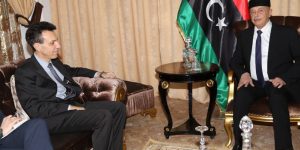 In an move aimed at improving relations with the east of Libya, Italian ambassador Giuseppe Perrone was in Tobruk today for meetings with the president of the House of Representatives (HoR), Ageela Saleh and a number of members.

Italy has come in for sharp criticism from the HoR and others in eastern Libya in recent weeks after it became the first country to reopen it embassy in Tripoli. The move was viewed as a firm statement of support for the Presidency Council and its government of national accord, both of which the HoR regards as illegitimate. There has been opposition, too, to the last week’s agreement between Italy and the Presidency Council (PC) on migration.

The visit looks to have been a success. Although initially criticised by HoR members today over Italy’s perceived lack of support for the Libyan armed forces in the fight against terrorism and the presence of Italian troops in Misrata, Perrone appears to have convinced them that Italy was simply adhering to the UN Security Council resolution regarding the arms embargo on Libya and that the troops were in Misrata solely to protect the Italian-manned field hospital there.

The ambassador was also reported as telling Ageela Saleeh that Italy continues to regard the HoR as Libya’s legitimate parliament.

As to the reopening of the Tripoli embassy, the HoR website reported that Perrone had said that while the embassy had to be based in Tripoli, diplomats were willing to travel throughout in Libya when necessary. He was also reported saying that Italy was considering reopening its consulate in Benghazi.

Attempts by the Libya Herald to confirm this have so far been unsuccessful.