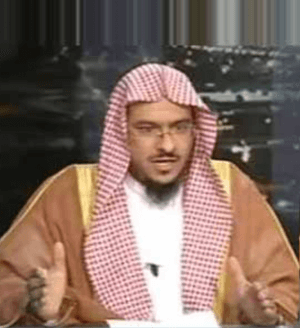 Tobruk locals have forced the closure of the local Awqaf and Islamic affairs office in the town in protest at the visit of a controversial, radical Saudi cleric.

Osama Al-Otaibi, also known as Abu Omar, was due to give a series of religious and ‘awareness’ lectures there today.

On his social media page Otaibi confirmed the postponement of his talks in Tobruk but said they would be rescheduled.

Otaibi arrived in Libya for a preaching tour on 8 January at the invitation of the general command of the Libyan National Army, in other words Field Marshal Khalifa Hafter.  The tour has so far taken in Ajdabiya and Beida. He was also invited to visit Zintan by the LNA’s western region commander, Brigadier Idris Madi.

Despite the anti-Islamist approach of Hafter and the LNA, the Madkhali branch of Salafism, which Otaibi espouses and which calls on the faithful to support their Muslim governments, is said to be finding increasing favour with the military leadership in the east.

The presence of the radical cleric has, however, been hotly debated by Libyans on social media.  While highly critical of the Muslim Brotherhood and the so-called Islamic State, he also attacks sufis and moderates, which goes again the grain for most Libyans, especially in the east.

It been reported that he also praised the recent confiscation of books by security forces in Marj. The seizure was widely condemned both in Libya and elsewhere as setting a dangerous precedent.

Otaibi, whose curriculum vitae says he fought in Afghanistan in 1991/2, has undertaken a number of preaching tours around the world, including five times to the US as well as to Canada. 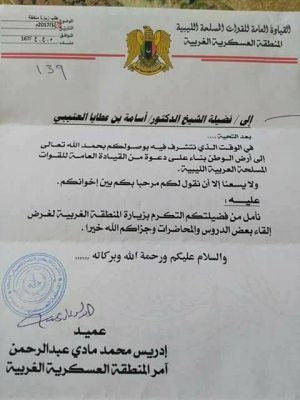