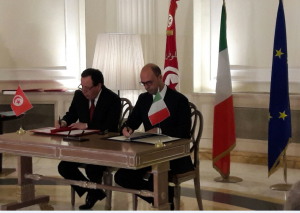 Tunisia and Italy have agreed to cooperate on tackling illegal migration and human trafficking across the Mediterranean and to help strengthen Tunisia’s borders with Algeria and Libya. The agreement, signed today by Tunisian Foreign Minister Khemaies Jhinaoui and Italian Foreign Minister Angelino Alfano, falls within the framework of a state visit to Italy by the Tunisian President Beji Caid Essebsi.

In talks between Essebsi and and Italian President Sergio Mattarella yesterday, the latter reaffirmed the two countries’ commitment to bringing political stability to Libya and to “increase our partnership in the fight against terrorism and human trafficking”.

Today’s agreement comes just days after the EU announced at its summit in Malta that it would increase collaboration with Libya’s neighbours to tackle the Libya crisis.

Last week, the head of the Presidency Council, Fayez Al-Serraj, was also in Rome to sign an agreement with Italian Prime Minister, Paolo Gentiloni on stoping the flow of migrants across the Mediterranean. It included proposals to return migrants to Libya and from there repatriate to their home countries.

The idea was also supported at the subsequent Malta summit. It has, however, come in for almost universal criticism from within Libya as well as from international humanitarian agencies.

The outgoing UN special envoy to Libya, Martin Kobler also rejected it yesterday in his address to the Security Council.

“Right now migrants cannot be repatriated in Libya”, he said, adding “I understand Europe’s concerns, but repatriation cannot work because of the humanitarian conditions in the country.”

Kobler stressed how the root cause of the crisis lies in what drives people out of their homes in Sub-Saharan Africa into Libya to reach Europe, and that because of this Libya was a victim of the migrant crisis as much as Europe.