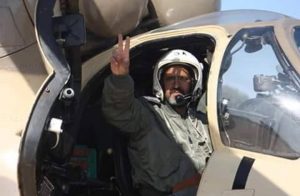 It is still unclear how an Libyan National Army Mi-35 heliopter came to crash south of Sirte yesterday. The army, which initially insisted a technical fault had been responsible, today admitted at a Benghazi press conference that it simply did not know.

The downing of the Russian-built chopper was claimed by a Benghazi Defence Brigade column. The LNA said that it had conducted nine strikes against this formation as it headed toward the Mabrouk oilfield. It claimed five militants had been killed and 20 injured.

Poor quality footage released by Khalifa Ghwell’s Foreign Media Department in Tripoli, begins with some type of aircraft clearly in trouble with smoke coming from it.  The height is hard to gauge but it is heading toward the camera, which breaks away to film an armed man running and shouting happily.  The lens then returns to a spot a kilometre or more away where a plume of smoke is rising from an explosion. 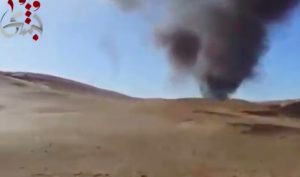 A later sequence shows one charred corpse in crewman uniform and the body of another crewman who appeared to have been thrown clear but suffered catastrophic injuries to the front of his head. There were no shots of a third body.

The pilot is known to have have been Colonel Mumin Al-Drissi but there are reports that the other two crewmen were members of his family, technical airman Ibrahim Al-Drissi and Corporal Elmabruk Al-Drissi.

The wreckage was still burning when the BDB cameraman reached it. One shot showed a blackened circular rocket launcher slightly away from the main crash site.

It is known that on at least one occasion, a rocket exploded prematurely when fired from an LNA aircraft.