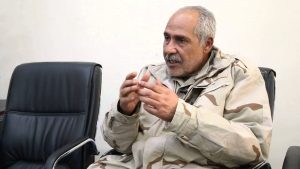 A controversial Libyan National Army commander, whose Beida home was raided by armed men this morning, has announced he has quit Hafter’s forces.

Colonel Faraj Al-Barasi has claimed that his farm near Beida was fired on and occupied  by armed men who were looking for him. He said he had not been at home but the attackers spent some time in the house and had taken goods and cars. He blamed armed forces commander-in-chief Khalifa Hafter and told Alwasat that he was leaving the LNA and the Dignity Operation.

Barasi and Hafer have had a stormy relationship. The House of Representatives appointed Barasi to head the Derna Operations Room but Hafter fired him saying he was incompetent, did not obey orders, made unauthorised press statements and was planning to attack Hafter.

Barasi had earlier been in charge of LNA operations in Benghazi’s Sabri district, where he protested that he was making no progress because he was kept short of weapons. Hafter retorted that he was not short of armaments but had been shipping weapons to Beida to prepare to betray his commander.

However, Hafter was forced to change his mind after members of the Harabi confederation, which includes Barasi’s Barasa tribe along with the Drasa, Hasa and Ubaydat had pressed HoR president Ageela Saleh and Hafter to reinstate him.

Another LNA officer Captain Adel Al-Drisi is also reported to have resigned today in protest at the attack on the Barasi farm. This evening footage surfaced of a protest in Beida in support of Barasi.