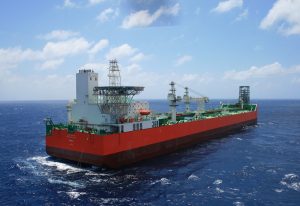 Four senior Libyan oil company executives were detained in Tripoli over an alleged fraud involving a new $425-million offshore oil storage vessel which only this week began woking in the Bouri oil field.

The executives, whose names are undisclosed, are from Mellitah Oil and Gas which operates the Bouri field. The company is a joint-venture between the National Oil Corporation and Italy’s Eni. The executives were detained by the Rada Deterrence Force which alleges that they abused their authority and wasted public money in the acquisition of the 120,000-tonne 329 metre-long storage tanker Gaza.

The floating storage and offloading (FSO) vessel was commissioned in 2012 from the South Korean yard STX Offshore & Shipbuilding in an ‘Engineer, Procure, Install, Commission’ (EPIC) contract typical of the oil industry. It was supposed to be delivered within 36 months. In fact it arrived last May at the Bouri field 120 kilometres off the coast. It has since been installed and tested before this week loading the first cargo into its 1.5 million barrel-capacity tanks.

Rada alleges that the contract price was inflated compared with the cost of other FSO vessels elsewhere in the world. It also says that though the Gaza was delivered eleven months late, penalty clauses for five percent of the contract value were not exercised. Moreover, it is being claimed the cost of the project overran by $100 million when the maximum overrun was limited to ten percent of the total price.

Rada says the men arrested include the chairman of the operations management committee in 2015, the legal adviser and the project manager who it alleges was also connected with the original bid.

The Gaza replaces the ageing storage tanker Sloug. The Bouri field discovered in 1976 began producing in 1988. Recently, Eni has begun to increase its activities in Libya. Last month it announced it had begun drilling an exploratory offshore gas well some 80 kilometres north of Zawia.