Benghazi : Tanarout where art is reborn 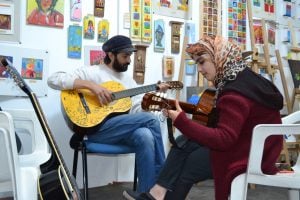 After a 33-month war, Benghazi’s people are trying to return to normal life. Tanarout Art Centre is a great example of culture remerging in Libya’s second city.

The Tanarout Centre is based in a small room where paintings, musical instruments, books and photography abound. But, as chaotic as it may seem, Tanarout is the place in Benghazi where personal freedom of expression is highly cherished.

Hussam Thini, a calligrapher and Mohamed Tarhuni, a writer, opened Tanarout in November 2015. However, it is only in recent weeks that the centre has started to blossom, benefiting from Benghazi’s relative freedom as the population began to move around easily again. About 40 members meet regularly to express themselves by talking, singing and painting.

Ennour, 31, first attended in early February and is already a big fan: “I found myself here. In the streets, people are closed-minded. But here you can say whatever you want. You can learn so many things.” Currently having guitar lessons, this young woman’s real ambition is to become a writer.

“Tanarout should be the first step in rebuilding Benghazi,” Hussam Thini says. His colleague, Mohamed Tarhuna, agrees and adds that “the centre should show that Benghazi is not just about war and that Libya is not only just terrorism”.

Within this context, Tanarout has two golden rules: looking for the truth and making people understand what is really going on in Libya.

However, it is a philosophy that can raise concerns in what is still a socially conservative city The ideas could be seen by some as too liberal.

Shifa, 20, discovered Tanarout via Facebook. She asked her parents to come so they could learn painting. “My father came and stayed with me the first time to be sure that Tanarout is a good place,” Shifa explains.

Tanarout has also received the support of the municipality, which has authorised the centre to organise a black and white photography exhibition in the coming weeks in Benghazi.

Nonetheless, the obstacles are numerous. Hussam Thini admits that Salafist Madkhalis have strongly criticised pictures that Tanarout published on social media. They object to women being seen painting, playing music and sometimes not wearing headscarves.

“Salafist brigades could try to shut the centre down but it won’t happen. I am sure that if we have any problems, our neighbours will protect us,” Hussam Thini declared.