Presidency Council leader Faiez Serraj has claimed that the reason there was no meeting in Cairo between himself and Khalifa Hafter was because Hafter had insisted on House of Representatives (HoR) President Ageela Saleh taking part in the talks but that Saleh had refused to meet Serraj.

In an interview with the London-based Arabic daily Asharq Al-Awsat Serraj, who flew back to Tripoli last night from the Egyptian capital, blamed the breakdown on the stubbornness of the other two.

“The intransigence of each party has resulted in the stagnation of a political solution and has increased the suffering of the Libyan people,” he said.

Ageela Saleh has already been accused by the US and the EU of blocking a settlement of the Libyan crisis and as a result is now sanctioned by both.

Despite the problems in Cairo, Serraj nonetheless stated in his interview that he believed that dialogue would “inevitably” find a way out, adding that he would announce a new roadmap in the next few days.

He made no disclosure as it what it was, but he had talked about unveiling a new roadmap before going to Cairo. It is thought therefore that this will be the proposal to reduce the Presidency Council to three members (himself still in charge, with two other deputies); a separate government, the commander-in-chief being the trio of himself as PC head, the head of the HoR and the head of the State Council; and a supreme military council headed by Hafter.

However, in the interview, he claimed that the matter of the military council and the reduced presidency council had not been discussed.

In a probably realistic assessment of the situation, Serraj also doubted whether any government formed in the present circumstances would gain HoR approval or enjoy public confidence.

For their part, the Egyptian authorities were today still trying to keep afloat their mediation efforts with Hafter and Saleh. Both have remained in Cairo, although Serraj is now back in Tripoli and there is hope of a second attempt to bring all three together in the Egyptian capital in the next few days.

Various other Libyan players are also in Cairo, including former ambassador to the UAE Aref Nayed and boycotting PC members Ali Gatrani and Omar Aswad. They too have been involved in talks. The latter two have also discussed the issues with Arab League Secretary General Ahmed Aboul Gheit.

Back in Tripoli, Serraj has meanwhile tried to convey a semblance of normality with a visit Tripoli Central Hospital to assess its needs and meet patients and staff.

There were discussions with staff about equipment required and he complimented them on their work, promising to ensure the necessary support so as to improve conditions. 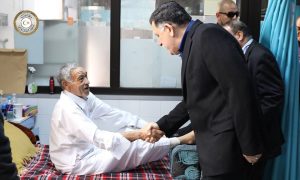