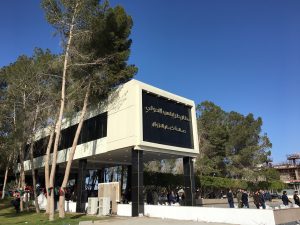 To mark the sixth anniversary of the 17 February Revolution, Khalifa Ghwell, the “prime minister” of the so-called National Salvation Government, presided over a high-profile reopening of Tripoli International Airport this morning.

In fact, what was reopened was the old VIP terminal which escaped the general destruction in mid-2014 when the Misratan-led forces attacked the Zintani units occupying it at the time. Re-habilitated and re-vamped, it was today presented as the new Tripoli airport.

All the way along the Airport Road, between the main traffic lights at the intersection next to what was supposed to have been Tripoli Gate shopping mall right through to the airport itself, there were gun-mounted vehicles belonging either to Misrata’s Al-Marsa brigade or the new Libya National Guard – the new but reduced Mark-II version of Libya Dawn force of 2014/15. It was also noticeable that so many of the “soldiers” manning them were young – very young. They seemed to be between 18 and 20 years of age, or even younger.

At the main gate the Libyan flag flew, but inside the feeling was that one place was running the show. “I felt I was in Misrata”, said one visitor. “The guards, the officials – they were all from Misrata.”

Many of the “guests” were noticeably drawn from the very people who every Friday and Saturday have been protesting in Tripoli’s Martyrs’ Square against Faiez Serraj and the Presidency Council.

Among others attending were LNG commander Mahmoud Al-Zaghel as well as a general galaxy of noted Islamists, former General National Congress (GNC) and Justice & Reconstruction party members. These included former GNC deputy president Awad Abdul Saddeq, as well as GNC members Mohamed Busidra, Ahmed Assadi and Mohamed Margham, plus Khaled Sharif and Saleh Badi, the former Misrata GNC member and militia commander who, more than anyone else, was responsible for the airport ‘s destruction in 2014.

They and the few members of the media who had been invited mixed for a time. Then Ghwell arrived in a convoy of some dozen vehicles. He formally “opened” the terminal and everyone was then told to go outside to see the first plane landing at the airport in two and a half years.

Expectations of an Afriqiyah Airbus or some other civil airliner arriving were disappointed however, when what appeared to be a small crop sprayer landed.

Those present were encouraged not to take photos. 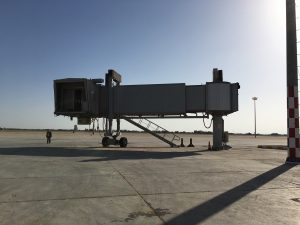 What was opened today was no more than the old VIP terminal. But next to it was the planned new passenger teminal, supposedly being built by a local company, Al-Sarih.