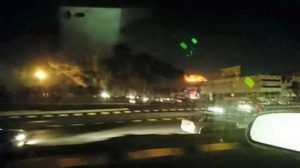 Fire at the Hall of People (Photo: Social media)

A fire seriously damaged the Qaddafi General Peoples’ Committee building in Hay Andalus this evening. It is not yet known if the blaze was deliberate or accidental.

However, the area is on the front line between Haitham Tajouri’s Tripoli Revolutionaries Brigade, nominally loyal to the Presidency Council, and the “rejectionist” forces of the Libyan National Guard that support Khalifa Ghwell as prime minister.

Still widely known as the People’s Hall, it was taken over by Tajuri last year.