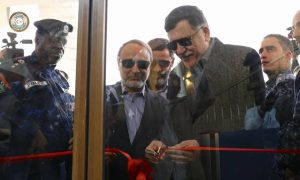 Serraj and Swehli survive an attack on their motorcade originating from the Rixos area. (Photo: PC/GNA)

There has been a failed assassination attempt on three leading political figures in Tripoli this morning. A motorcade transporting Presidency Council head/Government of National Accord prime minister Faiez Serraj, head of the State Council Abdulrahman Sewehli and the head of the Presidential Guard Najmi Nakoa, came under ”heavy shooting” as it drove by on the motorway in Tripoli this morning.

It was reported that a black Toyota Cruiser with two passengers drew up to the motorcade and opened fire at it.

The news was initially confirmed to Libya Herald by the media office of the  State Council. The PC/GNA Media Office as well as the PC/GNA Official spokesman Ashraf Tulti have confirmed the incident since.

The SC media office reported that the firing came from ”the armed groups based in the (Rixos) Palaces” area of Tripoli. While it reported that two guards in the motorcade were slightly injured, both the PC/GNA Media department and official spokesman Tulti refuted any injuries.

The HSC Media office said that three leaders were currently in an ”emergency” meeting in Tripoli.

A statement later in the day by Abdulrahman Swehli named Khalifa Ghwell as being behind the incident. The Rixos complex and Guest Palaces is the old home of the former General National Congress  and the base of self-proclaimed prime minister Khalifa Ghwell and his so-called Government of National Salvation.

The PC/GNA said that its forces gave chase to the attackers with the aim of arresting them and referring them to the judiciary.

Photos were later released by the PC/GNA media department showing Serraj and Sewehli officially opening the Central Investigation Department in Drebi. The incident was said to have occurred on their way back from that function.