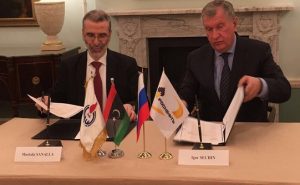 Russian oil giant Rosneft is looking to partner the National Oil Corporation in the exploration and production of new oil fields, while guaranteeing to buy some or all of their output.

NOC chairman Mustafa Sanalla yesterday signed a deal in London with Rosneft chief Igor Sechin, a close ally of Russian president Vladimir Putin and regarded by some as his effective deputy.

The two companies are to set up a working committee to evaluate E&P prospects and work out an offtake agreement, which would commit Rosneft to buy part or all of the resulting production.

“We need the assistance and investment of major international oil companies to reach our production goals and stabilise our economy,” said Sanalla, “This agreement with Russia’s largest oil company lays the foundations for us jointly to identify areas of cooperation. Working with the NOC, Rosneft and Russia can play an important and constructive role in Libya,” he added.

“It looks like Rosneft is going to be the vehicle for Russia’s resource play in à geopolitically reshaped North Africa” said John Hamilton, director of Cross Border Information in London. He pointed out that the company had already joined Eni in exploiting its major offshore Egypt find.

Currently the only Russian oil firm to have interests in Libya is Gazprom. In 2007 this company two blocks, one (No 19) offshore and the other (No 64) 300 kilometres south of Tripoli.  After extensive seismic on both blocks Gazprom was about to begin drilling in 2011 when  the Revolution began and it withdrew all its personnel. A Misratan port warehouse is still piled high with the equipment the Russian company had brough to drill its initial offshore well.

The third main Russian oil company, Lukoil had limited Libyan operations and never won a block in bidding rounds. One of its managers was briefly kidnapped in 2008.