Video circulates of purported LNA execution of IS member 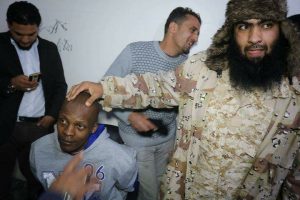 A man accused of being a fighter with the so-called Islamic State (IS) is reported to have been summarily executed by fighters linked to the Libyan National Army (LNA).

A video has been released by a group calling itself the Tariq Ibn Ziyad Brigade showing Mohamed Mustafa Al-Mugharbi kneeling in a pile of dirt in Ajdabiya. Voices in the video can be heard asking him how many soldiers he killed, before telling him he will be killed and become a corpse. He is then shot in the head with a Kalashnikov.

Mugharbi, known by the nickname “Randa”, is said to have managed to escape from Benghazi’s battle-scarred district of Ganfuda but then caught on Wednesday at a checkpoint outside his hometown of Ajdabiya. Meanwhile, a video found on a mobile phone in Ganfuda allegedly showed Randa involved in the killing of an LNA solider, Sulaiman Al-Huiti, in 2015. Under interrogation, he is said to have admitted to killing Huiti.

The Tariq Ibn Ziyad Brigade is said to be a Madkhali Salafist unit operating with the LNA.