Copper thieves cut-off mobiles and internet in the south 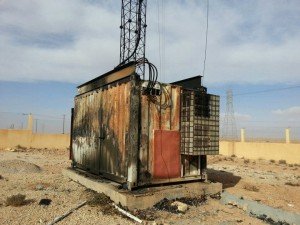 The theft of copper wire and equipment from isolated locations has become a common crime creating widespread disruption to local services. The latest to suffer are LTT subscribers in large areas of the south where telecoms and internet have stopped because cabling and batteries have been taken from a remote cellphone base station.

Senior LTT managers have called on the authorities to protect facilities and also guard repair crews being sent to fix the damage.

Stealing copper wire from telecoms infrastructure is a lower risk crime than cutting down power cables. In Sebha last July the charred corpse of a sub-Saharan migrant was found at the top of a pylon.  It is suspected that the man had been sent up there by people-traffickers to earn money for the rest of his journey to the coast.

By 2013 the problem had become so bad for state power company GECOL that it proposed installing aluminium cabling. However its engineers also faced threats when they went to restore damaged lines and on several occasions had their vehicles and equipment stolen.