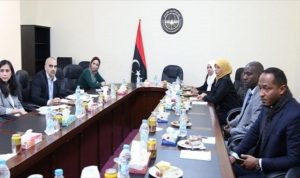 The House of Representatives failed for the second successive day to agree the membership of its new team to join the Libya Dialogue.  The chamber is due to meet again next week to try again.

The sticking point continues to be the selection of five representatives each from the west and south of the country. The five delegates from the east were agreed relatively quickly yesterday.

While the debate was going on, some HoR members took time out to meet a group of political officers from UNSMIL who had flown in to Tobruk.

Although UNSMIL said that the meeting was part of a regular programme of consultation, it seems likely that UN team was anxious to take soundings on what changes to the Libyan Political Agreement would be acceptable to the parliament.

The HoR web site said that the UNSMIL visitors had been warned that the UN mission should not repeat past mistakes and should not interfere in Libya’s internal affairs.