The last Indian hostage in Libya captured by the so-called Islamic State (IS) has been released, India’s foreign minister announced today. Sushma Swarak said Dr Ramamurthy Kosanam had suffered a gunshot wound but was now in the custody of Indian officials but would return to India shortly.

She did not say where he was rescued or explain how he was released only now when Sirte was liberated two moths ago. 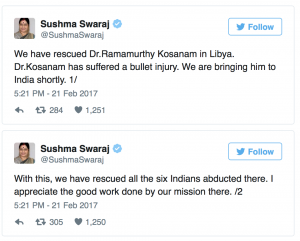 Kosanam, from India’s Andhra Pradeshia state, was abducted from Sirte’s Ibn Sina Hospital in September 2015 when IS was in control of the town. He was working at Sirte’s main hospital and taken along with an Indian bio-medical engineer, who was later released only days later.