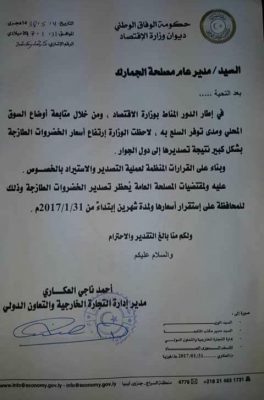 Libya has banned the export of fresh vegetables for two months in order to “maintain the stability of prices”. This follows a spike in the cost of produce in local markets, the Ministry of Economy in Tripoli announced yesterday.

It is not thought that the decision will have any significant effect on prices. While Libya produces vegetables, it is not enough and the country is a major net importer. The most recent figure for its export of vegetables, in 2010, showed the value totalled only $32,000 with the biggest market being Mauritania.

On the other hand, Libya imported $105-million worth of vegetables from Tunisia in 2015 and $139 million from Egypt in 2014, these being the most recent years for which figures are available.

However, the recent closure of the Ras Jadir border crossing and continuing problems there plus a ban on Egyptian imports has caused a drop in supplies, with the inevitable knock-on effect of rising prices.

Last September, the Tripoli-based Food and Drugs Control Centre called on authorities to ban the sale of Egyptian fruit and vegetables because of contamination fears. It was claimed officials at the Musaid border crossing were failing to carry out the necessary checks on imports. Misrata municipal council also barred Egyptian produce.

The Ras Jedir border point is partially open now, although movement is slow. However, a number of products, including vegetables, are being prevented from crossing into Libya.