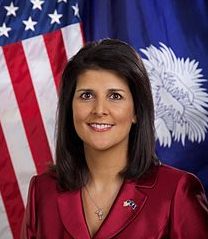 The Trump administration in Washington has objected to the UN Secretary General Antonio Guterres’ choice of former Palestinian prime minister Salam Fayyed as the new UN special envoy to Libya on grounds that he is Palestinian.

“For too long the UN has been unfairly biased in favour of the Palestinian Authority to the detriment of our allies in Israel,” complained Nikki Haley, the new US ambassador to the UN appointed by President Donald Trump.

It is not clear if the objection will scupper Fayyad’s appointment. Fayyad would be Guterres’ personal representative but his appointment as Head of the United Nations Support Mission in Libya (UNSMIL) requires Security Council approval.  The US could veto it.

A spokesman for Guterres said today that choosing Fayyad was “solely based on Mr Fayyad’s recognised personal qualities and his competence for that position”.

The UN’s support of a two-state solution between Israel and Palestine and its opposition to Israeli settlements stand at odds with the new US government’s position in regard to the Palestinians and Israelis. It is arguably, the most pro-Israeli administration ever. During his election campaign, Trump said on several occasions that he would recognise Jerusalem as Israel’s capital and move the US embassy there.

Although there are some indications that he may be backtracking on this promise – he now says he is still thinking about it – his hardline UN ambassador is quite clear where she stands in regard to the Palestinians.

“The United State does not currently recognise a Palestinian state”, Haley’s statement on the appointment of Fayyad as Martin Kobler’s successor read. Nor, she added, would Washington “support the signal this appointment would send within the United Nations.”

Fayyad was chosen by Guterres to replace Libya’s envoy Martin Kobler, a German diplomat who has served in this position since November 2015.

In an earlier edition we said that Washington’s objection to Fayyad’s appointment would have little effect because it was a personal appointment by the Secretary General. That was not correct.

Clashes in Tripoli between Tajouri’s forces and LNG allies