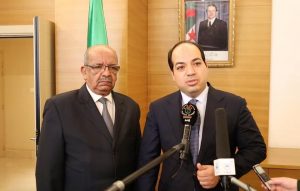 However, he said that before the meeting the six countries – Tunisia, Algeria, Niger, Chad, Sudan and Egypt – wanted to know whether the UN Secretary-General Antonio Guterres would appoint a new special envoy to Libya or continue with Martin Kobler.

Guterres announced his intention to appoint former Palestinian prime minister Salam Fayyad last month as UN special envoy in succession to Kobler and it was exected to come into effect at the end of this month. But the US has said it objects to the appointment of a Palestinian. As a result the whole question of the special envoy is up in the air at present.

The six last met in January in Cairo to review the Libyan crisis. However, Algeria Egypt and Tunisia, which were pursuing largely separate efforts to try and resolve it, are now working in collaboration following the rejection by Khalifa Hafter of Cairo’s endeavours to secure a deal between him and Presidency Council leader Faiez Serraj. The three countries produced their “Tunis Declaration” ten days ago following a two-day foreign ministers’ meeting in the Tunisian capital, in which they made clear their intention  to continue efforts for a Libyan peace deal.

Speaking yesterday, Messahel argued that Algeria “enjoys credibility among all Libyan parties” for two main reasons. The first was that it was impartial in dealing with the parties involved in the Libyan crisis. The second, he said, “lies on its principle of non-interference in internal affairs of other countries”.

Algeria, he added “has no special interests in Libya and has never interfered in the affairs of other states”. Libya had to find its own way through the political deadlock, Messahel added.

However, Algeria has made it clear on several occasions that it supports the Libyan Political Agreement and that, while it can be modified, a peace deal has to be based in it. That view is not at present accepted by some in the House of Representatives or by Hafter.

Messahel’s announcement about the six-state meeting came just a day after Presidency Council (PC) deputy head Ahmed Maetig was in Algiers for talks. Both he and the Algerian authorities emphasised the importance of the neighbouring countries to the stability and security of Libya.

Maetig also updated Messahel on the situation in Sirte and Libya’s moves to rid itself of the so-called Islamic State (IS).