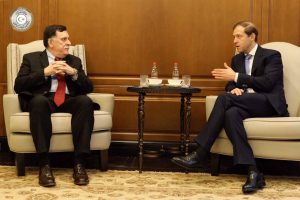 The Presidency Council is looking at reactivating business and training ties with Russia.  As part of the visit by Serraj and Maetig to Moscow, both men had meetings during the day with the Russian minister of trade and industry, Denis Manturov.

Russia is keen to reactivate contracts effectively suspended following the revolution, notably the railway link between Sirte and Benghazi. Among the various officials accompanying Maetig in his talks with Manturov was the head of Libyan Railways. However, in the present situation there is little chance of the project being reactivated or paid for.

Other stalled projects include Gazprom’s 49-percent stake in the concession in areas 96 and 97 near Jalu. The oil and gas sector is seen as the most likely to see a Russian return. Two weeks ago in London, NOC chairman Mustafa Sanalla signed a cooperation agreement with the chairman of Russia’s state-owned Rosneft company to assess new exploration and production opportunities.

Rusia is also keen to reactivate military deals with Libya. It also says Libya owes it $4 billion in past sales.