LNA claims its retreat has stopped at Al-Uqaylah 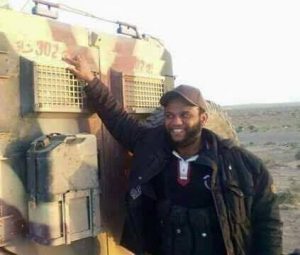 The Libyan National Army is putting a brave face on its ouster by the Benghazi Defence Brigades from the oil export terminals at Sidra and Ras Lanuf.  It is reported to be concentrating forces around Brega while it holds the frontline further west at Al-Uqaylah.  In the course of the day a Tebu brigade reportedly arrived at Ajdabiya and was sent forward to Brega. It is unclear how it reached Ajdabiya.

Overnight the LNA had warned people to stay off the roads between Ras Lanuf and Sirte and south towards Jufra.  Bunyan Marsous (BM) troops to the east of Sirte were also told they needed to withdraw to the town itself if they did not want to be hit. (LNA spokesman Colonel Ahmed Mismari, who had claimed that Misratan fighters had been with the BDB, had earlier said that the predominantly Misratan BM forces had not been involved in the attack on the export terminals.)

Throughout the day, the LNA has carried out a series of air strikes particularly around Ras Lanuf with a heavy raid going in this evening. There were also reported attacks on Ben Jawad  and Nufliya on the road west to Sirte and on Sidra.

There are no details of their effectiveness.

Indeed the majority of the reports and images coming out of the fighting is from the BDB, showing what are claimed to be destroyed LNA technicals and a captured T-55 tank.

One picture shows the Ajdabiya Islamist leader Osama Jadhran smiling beside an armoured vehicle. His brother Ibrahim Jadhran commands the Petroleum Facilities Guard which controlled and shut down the four Oil Crescent export terminals for two years until it was forced out last September by the LNA .

There are still no clear figures for casualties on either side. An LNA source has said that  27 soldiers have died. The funerals of some of these troops were held in Ajdabiya today. However, it is understood that forces linked to the LNA also lost around 40 men in the battles of Friday and Saturday. Some 35 of these casualties came from the south and west of the country, including Wirshefana. There was anger that in the LNA’s first accounts of the fighting, no mention was made of their losses. This newspaper has been told that they therefore withdrew from Ras Lanuf to Brega. This being correct, it might explain why the promised LNA counter attack did not materialise and instead all  troops were pulled back to Al-Uqaylah.

LNA sources yesterday admitted that there had been confusion when the BDB opened their offensive. Mismari has since claimed that the attackers used sophisticated equipment to jam LNA ground and air communications.  It is unclear if LNA signals units have since brought in counter measures.

Over the last 48 hours there appears to have been a series of arrests behind the LNA lines. It is reported that among those detained are the police chief in Ajdabiya and the mayor of Brega. The allegation seems to be that they were part of some conspiracy to deceive the LNA before the BDB attack.

Meanwhile in Misrata, BDB commander Mustafa Sharksi has held a press conference in which he proclaimed “our goal is to rescue Benghazi from Hafter and return displaced families to their homes”.  He referred to the siege of Ganfouda where Benghazi Revolutionaries’ Shoura Council fighters, along with their IS and Ansar Al-Sharia allies, continue to hold out in the “12 Apartments” complex despite now being besieged for over five weeks.

Sharksi said that his force controlled some 170 km of coast stretching either side of Sidra and Ras Lanuf. He emphasised that the BDB would not press on to Benghazi until another force had been sent by the National Oil Corporation (NOC) to take over the oil ports.  He also referred to the what he called the “Benghazi Military Zone”, but did not say what are it covered.

Meanwhile, the State Council of Abdulrahman Sewehli has called for the return of the Oil Crescent terminals to the control of the Presidency Council’s Government of National Accord (GNA). In a statement today it said that priority had to be given to the voice of reason and wisdom; violence should be renounced and a ceasefire put in place .

The French, UK and US ambassadors also put out a joint a statement condemning the fighting and calling for an immediate ceasefire. They warned that “individuals or entities misusing Libyan resources may be targeted by measures”. Oil infrastructure, production and exports had to be under the exclusive control of the National Oil Company, they said, acting with GNA.

The ambassadors also denounced last week’s storming of NOC’s Tripoli HQ by militiamen supporting Khallifa Ghwell, head of the resurrected National Salvation Government. They called for the protection of all NOC employees.

Apparently, the militia men are still holding the fifth floor of the HQ.

Awad Barasi, Ali Zeidan’s former deputy prime minister has also warned that NOC must be spared political and armed interference. He said today that the current fighting showed a lack of awareness of the devastating effect it would have on Libya’s major source of income. He said the conflict would only inflict further damage on the people of Cyrenaica.

While Faiez Serraj has insisted that the PC was not behind the BDB’s Oil Crescent assault, Mohamed Eljarh, a respected Libya commentator, has claimed that at least one unit loyal to the GNA’s defence minister Mahdi Al-Bargathi, which he names as the 12th Infantry brigade, has been fighting alongside the BDB. Three days ago, Bargathi said that the PC should send an independent force to stop the fighting.