LNA said to have 5,000 troops at Brega while Hafter pays Cairo flying visit 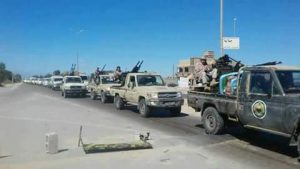 The Libyan National Army is said to have massed 5,000 troops with tanks and artillery in the  Brega area in preparation for a second counterattack on the Ras Lanuf and Sidra export terminals lost to Benghazi Defence Brigades-led forces on Friday and Saturday.

There are reports that armed forces commander-in-chief Khalifa Hafter made a brief visit to Cairo today. It is not known whom he met. Air force commander Saqr Geroushi who is believed to have suffered a heart attack  yesterday is understood to have been flown to Cairo for treatment.

The concentration of LNA units came as the air force continued air strikes against BDB positions in and around  Ras Lanuf and Sidra.

Meanwhile eight solders are reported to have been killed in a battle at Al-Uqaylah, the small town to which the LNA retreated after being pushed out of the two oil ports.  Casualties among the BDB and their supporting forces are not known.  LNA spokesmen Colonel Ahmed Mismari maintained that casualties had been high and that the BDB had been commandeering ambulances to ferry their dead and wounded away to the west.

Despite or perhaps because of the urgent call on men and equipment to the west, LNA commanders appeared to have stepped up their operation to take the last parts of the 12 Apartment complex in Ganfouda, a battle which has now lasted over five weeks.  It is claimed that an ammunition store was discovered today in one of the buildings.  At the same time there has been shelling of Sabri, the downtown Benghazi  militant stronghold which was also strafed by at least one helicopter gunship.

UNSMIL chief Martin Kobler has  today warned that the escalating battle in the Oil Crescent could ignite a wider conflict.

“The immediate priority is to de-escalate tensions,” he said in a statement, “prevent further loss of life and ensure that Libya’s national infrastructure and natural resources are under the control of legitimate authorities”

The unacceptable violence demonstrated the need for all parties to engage seriously in the political process within the framework of the Libyan Political Agreement.  Kobler insisted that UNSMIL remained “ready to host any inclusive mechanism that brings together empowered, representative Libyan stakeholders able to resolve those issues blocking implementation of the Agreement.” This did not appear to be a proposal that UNSMIL should try and help broker a ceasefire.