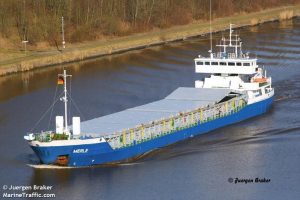 The owners of a Russian merchant ship arrested off Zawia said today that they were doing everything to secure the release of the vessel and its seven Russian crew.

The MV Merle, a bulk carrier was stopped and boarded by the Libyan Coastguard on Sunday and taken to Tripoli. It appears that it was suspected of being involved in smuggling scrap metal.

Russian news agency TASS has reported that the vessel is owned by the MT Group, a St Petersburg-based conglomerate which includes property and marine technology on its web site.  However, it does not mention the operation of any cargo vessels.

A company spokeswoman said that it was working with the foreign ministry in Moscow and diplomats  at Russia’s Libyan mission, trying to work out what had happened.

“Everyone is engaged in the situation” she told TASS. “We are trying to understand the causes of the detention and are taking measures to resolve the situation.”

TASS said that the spokeswoman declined to say from where the seven Russian crew members came but said that the company was in touch wth their families.

The Coastguard has  given no details of the arrest except to say that the case has been referred the the attorney-general. It is not clear where the Russias are being held.

The Merle is the third Russian vessel to be arrested in the last two years. The other two craft were tankers, detained on suspicion of smuggling fuel product from Libya. The tanker Temeteron was seized in June last year, ten months after the Mechanik Chebotarev was detained, both tankers off Zuwara.