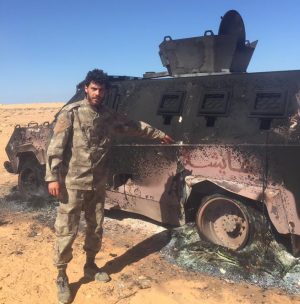 The bodies of 21 Libyan National Army soldiers have been brought to hospitals in Benghazi and Ajdabiya, local sources told the Libya Herald. All were killed in today’s fighting that saw the LNA recapture the Sidra and Ras Lanuf oil terminals.

No figures have been released for the number of soldiers injured nor for the dead and wounded among the Benghazi Defence Brigades.

LNA spokesman Ahmed Al-Mismari claimed this afternoon that the remnants of the BDB had fled to Misrata and Jufra. He told a Benghazi press conference that BDB fighters had been captured trying to escape to Jufra but he did not say how many. 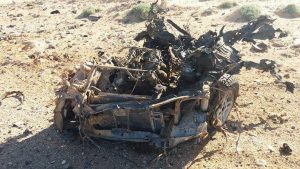 Mismari added that Hafter had ordered his commanders to oust the BDB from Jufra and that LNA units were already concentrating to liberate the town.

According to social media, warplanes could be heard operating overJufra and Hun this evening

Meanwhile, the UK, US, French and Italian ambassadors have expressed their “strong concern” over the fate of Libya’s oil facilities. They called for an end to hostilities in the Oil Crescent to protect Libya’s most critical oil asset.

“Oil infrastructure, production, export and revenues belong to the Libyan people and must remain under the exclusive control of the National Oil Corporation,” they said.

All these ambassadors, save the Italian, came up with similar remarks eleven days ago when the BDB first attacked LNA positions in Sidra and Ras Lanuf.

The House of Representatives president Ageela Saleh has praised the LNA for retaking the oil terminals and offered his condolences to the families of those soldiers killed.