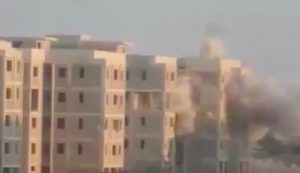 The Libyan National Army (LNA) launched a major offensive yesterday to finally rid Benghazi’s Ganfouda of Islamist fighters. An unknown number of militants remain holed up in the “12 Buildings” complex situated between Busnaib and Ganfouda.

A spokesman for the LNA’s 130 Artillery Brigade told the pro-Beida LANA News Agency that its forces had made important gains and were able to consolidate its hold on critical areas of the complex.

He claimed his forces had killed an unspecified number of Benghazi Revolutionaries Shoura Council (BRSC) fighters. However, a spokesman for the LNA’s Saiqa Special Forces, Milad Al-Zwai, told LANA three of his solders had been killed and another four injured in the attack. LNA fighter jets had supported the offensive, Zwai also revealed.

Nonetheless, he insisted the BRSC fighters remained trapped in the “12 Buildings” complex with no chance of escape. The LNA would not stop until the militants were crushed, he added.

A few dozen civilians are reported to be holed up in the buildings. Zwai alleged they were being used as human shields by the fighters and, as such, his men were advancing cautiously to prevent innocent casualties.