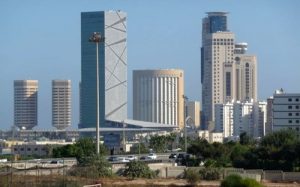 Staff working at Tripoli Tower and other buildings in the capital’s central business area were evacuated late this morning as fighting in the city’s western suburbs spread towards Suq Al-Thalath roundabout that separates central from west Tripoli.

“We were told to go home for our own safety,” a local resident working in one of the neighbouring five Dat Al-Imad tower blocks told the Libya Herald.

Waha Oil Company staff at the its Bulayla Tower headquarters  have also been evacuated.

The fighting is a continuation of the clashes in Gurji that followed last week’s killing outside the Aman Bank headquarters by a Misratan guard of a man from Zintan but who was living in the suburb. It appears to have been the last straw for locals from Hay Andalous to Ghut Shaal who have already protested on a number of occasions against the presence of Misratan and Amazigh forces in the areas.

The fighting re-ignited last night when armed residents in Gurji and Hay Andalus attacked Misratan and Amazigh units, with Haithan Tajouri’s Tripoli Revolutionaries’ Brigade coming out in support of the locals. Other Tripoli forces, including those from  under Abdul Raouf Kara and Abdul Ghani Ghneiwa plus the police are also reported to have joined them. On the other side, the Mobile Forces based in Janzour area also reported to have also joined in.

The clashes spread to the neighbouring area of Ghut Shaal, Hay Al-Islamiya and Gargaresh. A number of shops, cafés and two banks, including the National Commerical Bank (NCB) are said to have been destroyed or damaged. The Momento Café, across the road from the NCB, is reported to have been targeted because of allegations that its owner is a member of Misratan milita. Tajouri is said to have moved tanks into the area. 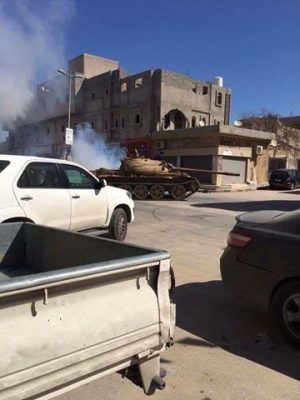 Tanks are reported in the streets of Ghut Shaal and elsewhere in west Tripoli (Photo: Social media)

So far there are no details about casualties. Residents, however, are staying indoors, schools and other buildings are closed, and roads in and out of the areas are blocked.

UN Special Envoy Martin Kobler has called for an immediate ceasefire in the area. Civilians were at grave risk as a result of the clashes,

“Repeated violence in Tripoli again demonstrates the need for united, professional security forces to protect the Libyan people,” he tweeted this afternoon.