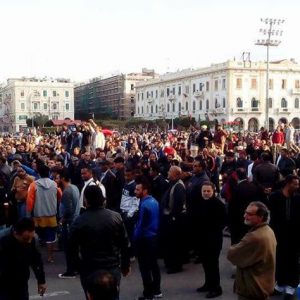 Hafter supporters fled Tripoli’s Martyrs’ Square tonight as militant gunman opened fire at the end of a day-long demonstration.  Afterwards the Presidency Council warned that the capital risked being dragged into a bloodbath.

The protest began in Algeria Square after Friday prayers with a few hundred participants then moved to Martyrs’ Square where numbers swelled to over a thousand including onlookers. The demonstrators chanted demands including the removal of militias from the capital and the creation of a unified police and security force.

They also shouted out against Sheikh Sadiq Ghariani, the head of Dar Al-Ifta. Most significantly they voiced their support for armed forces commander-in-chief Khalifa Hafter.

The protest was brought to a dramatic halt when gunman in three vehicles opened fire apparently into the air.

“Suddenly, a hail of bullets passed over our heads and the situation was so terrifying,” a demonstrator told the Libya Herald.

Video showed some demonstrators fleeing into the old town. The sound of gunfire appeared to change from random bursts to individual shots suggesting that the gunman were trying to fire for effect. As yet there are no details of any casualties.

The old Libya Dawn foreign media department, which is still functioning under its adroit director Jamal Zubia, this evening posted pictures appearing to show anti-Hafter protestors also in Martyrs’ Square. Questions to the FMD about the fate of these demonstrators when the gunman-opened fire have gone unanswered.