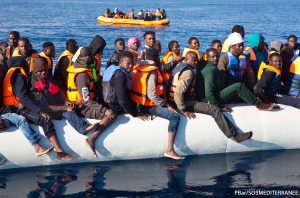 Over 3,000 migrants were saved off the Libyan coastline today, a vast increase on the 1,394 rescued in February this year.  The Zuwara coastguard also reported finding 38 bodies from two capsized rubber rafts.

The Aquarius, run by Doctors Without Borders, which has been playing a key role in rescues, today itself saved 946, including 200 unaccompanied minors.

“After some calm days, migrants are arriving in large numbers, taking advantage of a window of favourable weather,” a coastguard official told AFP.

By early afternoon the International Organisation for Migration (IOM) had already reported they had rescued nearly 350 migrants off Zuwara. These included 77 women found on two rubber boats. They also reported three dead bodies were recovered.

AFP said the migrants rescued by the Aquarius had been found drifting on nine wooden and rubber boats.

A video taken from the ship showed young children dancing to the sound of music played by drums from fellow migrants.

Two days ago, the Italian government said 16,206 people have been rescued so far this year compared to 11,911 at the same time last year.