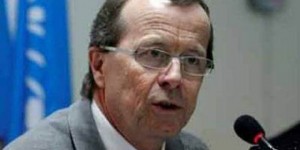 The international community has today begun to condemn Saturday’s abuse of the corpses of militants in Benghazi’s Ganfouda with protests by UN envoy Martin Kobler and UK ambassador Peter Millett.

“The mutilation of corpses in Libya is completely unacceptable,” said Kobler while Millett tweeted he was “concerned by violations during the combat operations in Benghazi. I urge all parties to respect international law,” he added.

Both envoys also warned of the dangerous escalation of clashes in Tripoli, with Kobler calling for all parties to put Libya and the unity of Libya ahead of their own narrow interests.

He insisted that “calm must be restored immediately, democratic bodies and ideals must be respected and freedom of speech must be protected”.

Millett said he understood the “frustration of Tripoli residents at the insecurity and challenges they face.”

Whilst Kobler said the activities of militias were a serious risk to stability, ultimately, “the responsibility, however, lies first and foremost with the Libyans themselves to end this escalating violence”.

He called on Libyan institutions to commit to advancing the Libyan Political Agreement and swiftly implement the security arrangements in Tripoli that provide for the withdrawal of armed groups from the capital and the deployment of army and police.