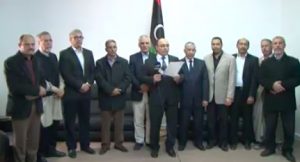 Misratan members of the House of Representatives and the State Council as well as the city’s mayor Mohamed Eshtewi and councillors have warned of growing divisions between moderates and hardliners in the city. However, they have also reassured residents that the council remains fully in control, telling them to ignore the hardliners.

The statement comes as Misrata TV confirmed that it was attacked last night by militants who, it said, had threatened staff. The local radio station was also targeted.

Both are now operating normally.

On Friday evening, Misrata municipal council officers were briefly attacked by gunmen, believed to be from the same group as those responsible for last night’s incidents.  The hardliners are from a number of smaller militias from the city, all of which oppose both the Presidency Council, which the council and lawmakers support, and Khalifa Hafter. These militias, which support fellow Misratan Khalifa Ghwell as prime minister, include Salah Badi’s brigade and the so-called “Presidential Guard” which was formerly protecting the Rixos complex in Tripoli.

Expressing their concern at the attacks, the council and the lawmakers said  they wanted legal action taken against those who had launched them. They insisted they were sticking strongly to democratic principles. In a broadcast statement they rejected the use of force to impose views as well as stressing the importance of preserving Misrata’ social fabric and maintaining good relations with other towns and cities in the country.

The group warned that staying silent in the face of such aggression might lead to civil war throughout the country.