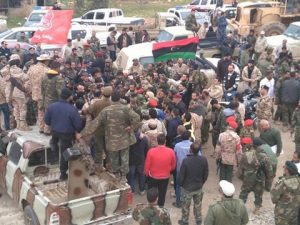 Armed forces commander-in-chief Khalifa Hafter has ordered the immediate and unconditional release of all women and families detained during the liberation of the west of Benghazi except for those facing criminal charges.

The move follows the local and international outrage at the footage showing the summary execution of prisoners and the parading of the decomposing corpses of militants exhumed from shallow graves in Ganfouda’s long-besieged 12 Buildings. Today the Libyan National Army (LNA) found the bodies of seven of its own soldiers in the complex. It is unclear if they had been captured and executed or killed in the fighting.

The LNA has said that those troops guilty of war crimes will be arrested. This was echoed by Wanis Boukhamada, commander of the Saiqa Special Forces. A key suspect is Mahmoud Warfali who resembles a gunman seen executing a total of four men in two separate filmed murders. Warfali is a colonel in Saiqa. It is unclear if he has yet been detained and questioned. There are reports that another significant member of the Special Forces was photographed alongside one of the disinterred militants.

Benghazi House of Representatives member Jalal Al-Shweidi has demanded that Hafter and army chief of staff Abdelrazak Nazhuri come to the parliament to explain how the crimes had been permitted and what they were doing about them.

The furore over the videos has dampened the celebrations in Benghazi at the final defeat of the Ganfouda militants. But there were still a small but enthusiastic crowd to greet the reopening of the Tripoli road through Ganfouda which has been closed for three years by the fighting. Military engineers spent two days checking the route for IEDs and unexploded ordnance. The reopening means that travellers wanting to head down to Ajdabiya will no longer have to take a 12 mile detour to the south-west of the city.

Troops continue to search for militants who escaped the 12 Buildings siege. One alleged escapee was found yesterday hiding under tin sheeting on a farm and another was caught nearby in Gwarsha. Both were taken to Granda prison. 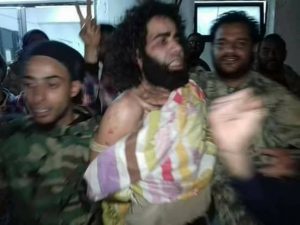 The captured Ibrahim Al-Zaroug before he was given an Ahli football shirt to wear (Photo: Social media)

The two men, Ibrahim Al-Zaroug and Talal Bin Hmaid are Bengazinos like nearly all of the Benghazi Revolutionaries’ Shoura Council and many in Ansar Al-Sharia.  Fans of the city’s Ahli football club  were reportedly furious that after being captured semi-naked, Zaroug was given a club shirt to wear. Neighbour has sometimes been fighting neighbour. Indeed Warfali and militant commander Jalal Makhzoum both lived near each other in the city’s Salmani district.

But not all of the captured militants are local. Three men said to be members of the Al-Farooq brigade, founded in Misrata in 2011, are Tuareg from Obari. Another is an Egyptian.