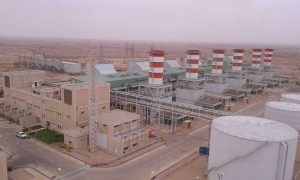 Electricity production at the Ruwais power station near Nalut in the Jebel Nafusa has been dramatically reduced after protestors turned off the gas supply this morning. It has led to fears of major power cuts in the Tripoli and elsewhere in the wast of Libya.

Valves on the pipeline from Eni’s Wafa field were turned off near the station by members of the Petroleum Facilities Guard claiming that they were owed money. They also demanded the authorities improve a range of local service, including healthcare, infrastructure, education and the supply of cooking gas cylinders, before they would reopen the valves.

GECOL, the national electricity company, has said that 500 megawatts of power had been lost to the national grid as a result and that Ruwais would have to close altogether if the gas supply were not reconnected.

Back in late 2013, the capital suffered major blackouts after power generation at the 900-MW, six-turbine station was hit when the gas supply was cut off to the station for a month by Amazigh and Tebu protestors.

Two of the turbines at Ruwais can operate on oil, and during the 2013 blockade one of them did so for a while, but it took 50 trucks a day to feed it with 60,000 tonnes of diesel. This produced 125 MW, compared to 150 MW when running on gas.

The pipleine now switched off feeds not only the station but also supplies gas via Zawia undersea to Italy.