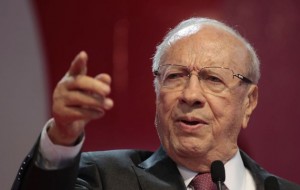 Armed forces commander-in-chief Khalifa Hafter has reportedly rejected an invitation to go and talk with Tunisia’s president on the grounds that the country has aligned itself with Tripoli and the Muslim Brotherhood.

The Tunisian daily Alchourouk reported that the invitation from president Béji Caïd Essebsi had received no reply. Nevertheless the paper also said that Hafter had spurned the offer because he considered Tunisian support for Tripoli and the Muslim Brotherhood to show it hostile to the powers in Tobruk represented by the House of Representatives and the Libyan National Army.

Essebsi clearly wanted to involve Hafter in the rounds of talks with all Libyan players which the Tunisians and Algerians, along with the Egyptians have been nudging along in recent weeks.

There has been no formal response from the Tunisians nor even an acknowledgment from Hafter’s people that any invitation to Tunis had been received.